Made in USA: Opportunities and Challenges

For more than a decade, deciding where to build a manufacturing plant to supply the world was simple for many companies. With its seemingly limitless supply of low-cost labor and an enormous, rapidly developing domestic market, an artificially low currency, and significant government incentives to attract foreign investment, China was the clear choice.

Now, however, a combination of economic forces is fast eroding China’s cost advantage as an export platform for the North American market. Meanwhile, the U.S., with an increasingly flexible workforce and a resilient corporate sector, is becoming more attractive as a place to manufacture many goods consumed on this continent. An analysis by The Boston Consulting Group concludes that, by sometime around 2015—for many goods destined for North American consumers—manufacturing in some parts of the U.S. will be just as economical as manufacturing in China. The key reasons for this shift include the following: 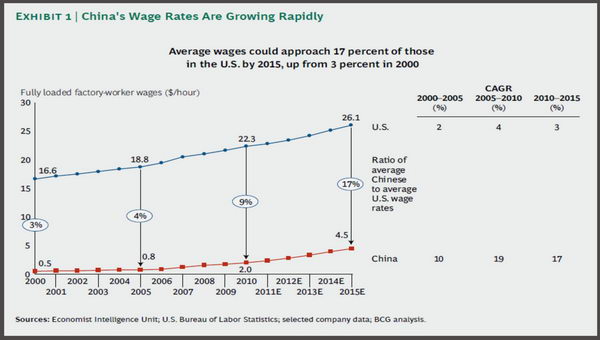 This reallocation of global manufacturing is in its very early phases. It will vary dramatically from industry to industry, depending on labor content, transportation costs, China’s competitive strengths, and the strategic needs of individual companies. But we believe that it will become more pronounced over the next five years, especially as companies face decisions about where to add future capacity. While China will remain an important manufacturing platform for Asia and Europe, the U.S. will become increasingly attractive for the production of many goods sold to consumers in North America.